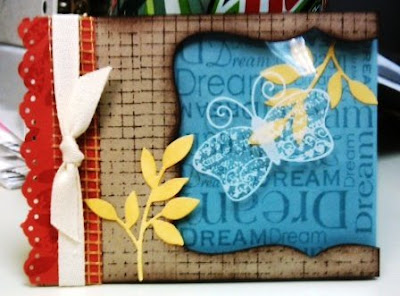 Okay, I admit it. I'm into butterflies right now...especially this one. It's a nice image, don't you think? I created several of these for Hippieaud's SWAP.

The following image is almost exactly like the above, I only changed the back of the card and the placement of the die-cut leaves. 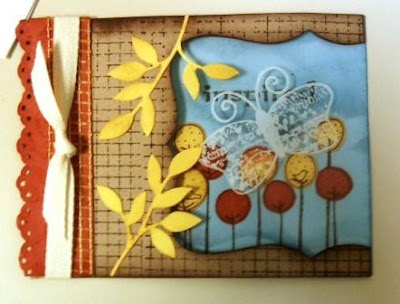 I had originally planned to do the second card for the swap, but it really was taking much too long to cut out all the little circles for the tree tops...so I changed my design a bit so I could get them postal.

It's raining here today again, but not as much as it was the days after I returned from my trip. The rain puts me in a rather mellow and tired mood sometimes - and sometimes pensive. Today would be one of those days.

I'm thinking of my acting friend, Jami, who is on the verge of passing into the next phase of her existence. Beyond life. It was reported to me yesterday that she probably won't make it through the week, which is extremely sad for her daughter. Tessa will lose her mother just before Mother's Day this year. If I could, I would say the following to my friend, Jami:

Jami, being your sister, Stella, in A Streetcar Named Desire [Tennessee Williams] was one of the highlights of acting. Remember your line as Blanche, "I don't want reality, I want magic"? I wish for some magic now. I wish for a reality that doesn't include you being whisked away from your family much too soon. Like Blanche, I desire an illusion that includes happier times for you and your family.

Jacqueline said…
beautiful card! so sorry about your friend you are honoring her wonderfully.
Wed Apr 29, 04:31:00 PM EDT

Anonymous said…
I am so sorry to hear about your friend. She and her family, and also you, will be in my prayers.

I love the cards as always.

Anonymous said…
Sorry, about the deleted comment. I put your daughter. Definitely praying for their daughter. They are facing tough times, but I do pray that they can rest in Him.

Anyway, when you get a chance, email because I have a quick questions for you :) dwycough7@aol.com

Amy said…
The card is beautiful!! So sorry for your friend...
You won a book come and see me at
http://chicbookreviews.blogspot.com
I don't have your email and I need your address
castellanoamy at yahoo dot com
Fri May 01, 02:47:00 PM EDT