March 30, 2015
Now that I've settled in Sydney and a couple projects have "settled" down, I've made a point to venture out and explore this giant island...starting with the outskirts of Sydney.

Usually, I have a day of chores and a day of adventure.

Saturday this past weekend was market day.... 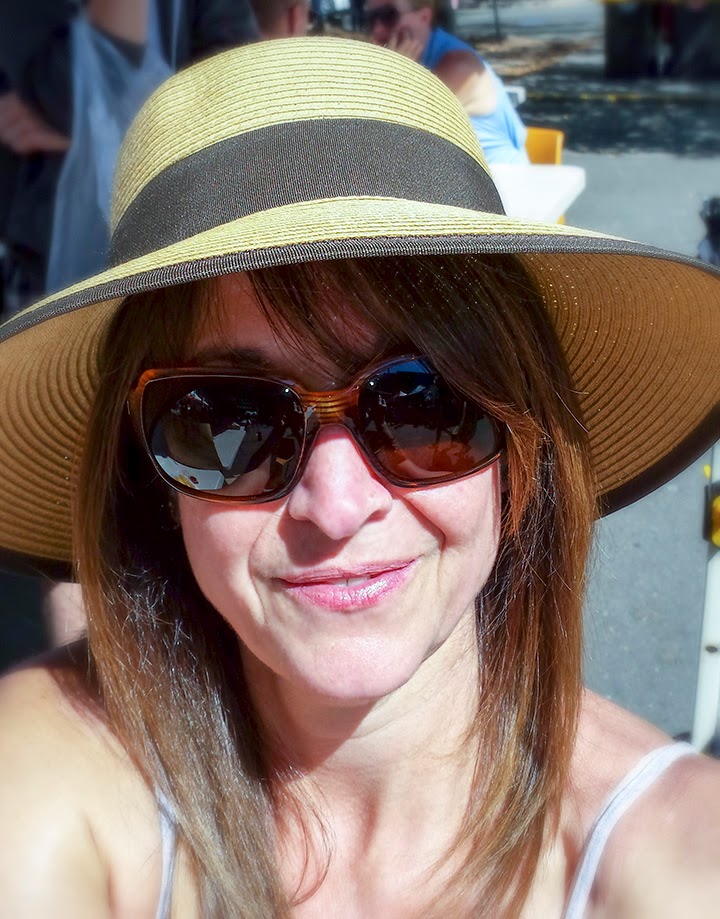 Heading all warnings (especially after quite the sunburn recently)...I slathered myself in sunscreen and shielded my face with a hat.

And Sunday.  Trekking.  I took the train and then a bus to Malabar Bay.  Here's the overview: 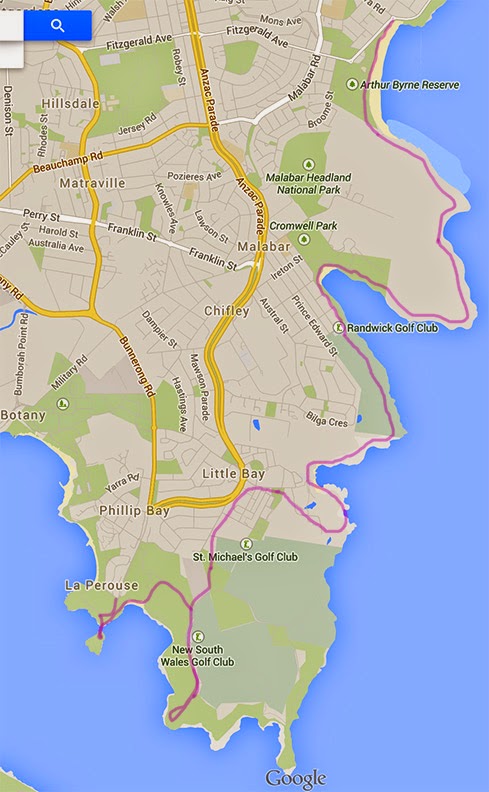 I mostly jogged from Malabar to Little Bay. I say mostly because there were places where it was thick with bush or sand that I walked through....I have to admit that I was a bit nervous.  Knowing that Australia is home to the DEADLIEST snakes in all the world doesn't help...especially when you aren't sure where they might be...and you see the few occasional signs warning of "snake sightings".

Having said all that, it's easy to get distracted by the views.  Of which there are a breath taking many...

This is the photo after leaving the bus and jogging a bit past the beach. 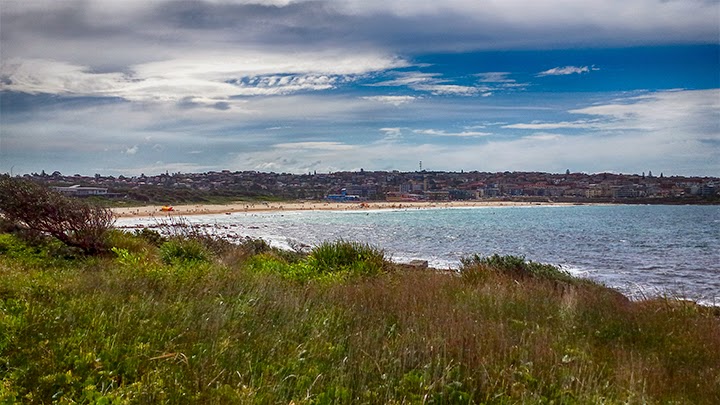 By this view, I had forgotten all my worry of snakes. 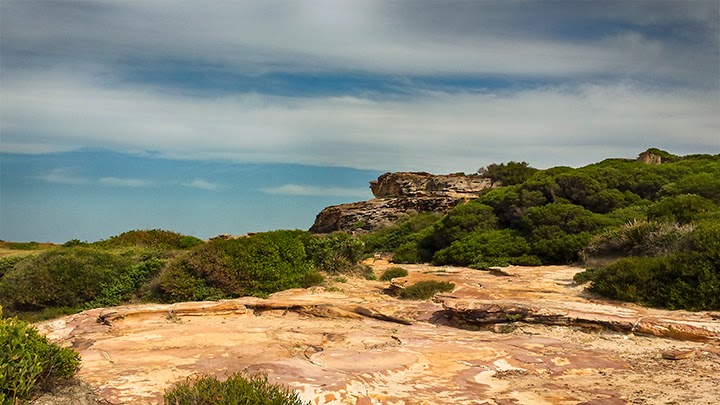 There is just no way to capture the beauty and awe of a good view: 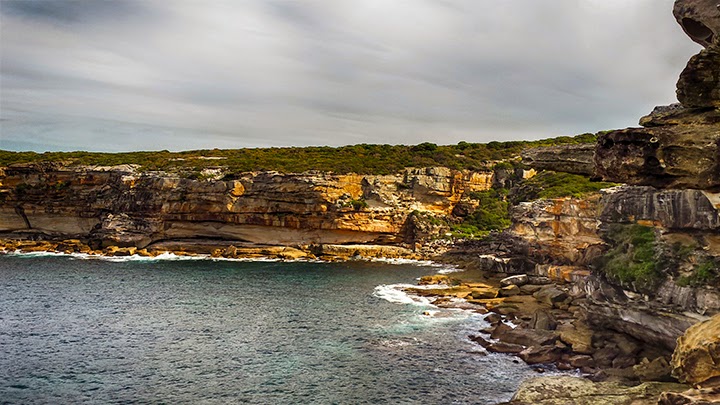 After that, I ran across a couple golf courses (which hugged the craggy beach line.)  Pebble Beach doesn't even compare to the beauty, but not being a golfer, I just jogged along.  I was happy that they allowed walkers and joggers on the course.  I didn't take any pictures of that part of the trek.  It was a golf course.  Can't say much more (of course, not being a golfer).

From there, I quit jogging and started walking...cutting over towards La Perouse through the suburb until I hit Botany Bay National Park.

I walked down along a trail and finally hit the beach.  There were lots of folks camping along the beach.  Can you imagine unzipping your tent and capturing this view? 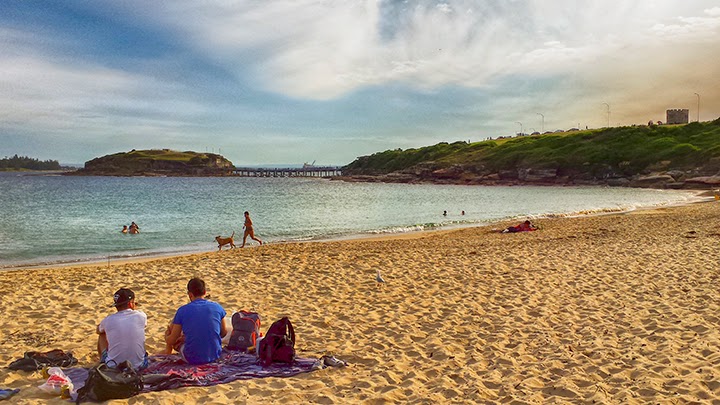 So, if you look at the shot above and off in the distance, you will see the rocky shoreline.  It's like a fun craggy rocky walk. With shoes off, I climbed around until I was under the bridge for a walk over to Bare Island.

The below picture looks a bit surreal. 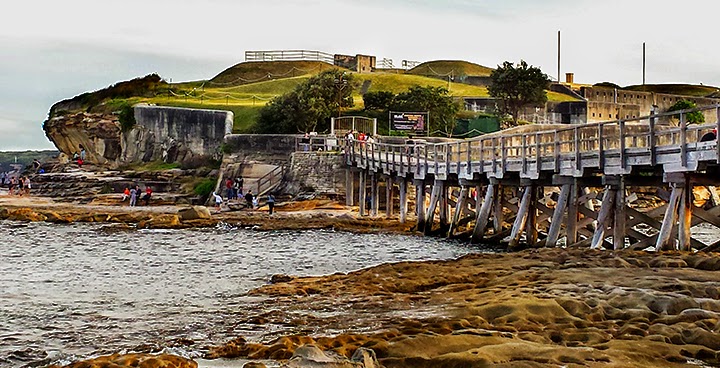 Below, a bride was having her photos taken in the wind in front of Macquarie Watchtower: 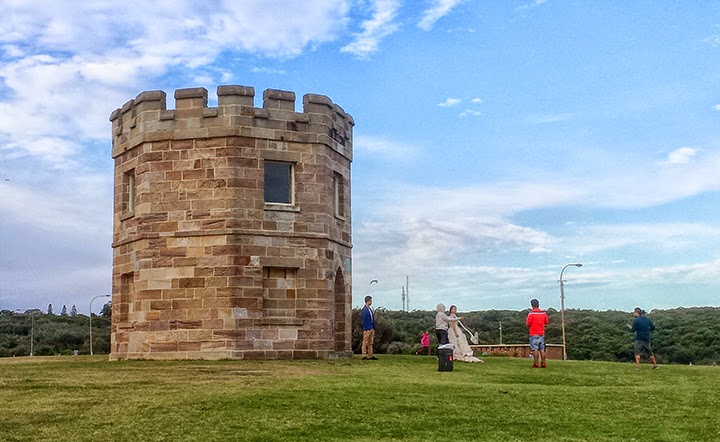 And I ended the walk in front of the La Perouse Museum, which was closed...Then I was off to a well deserved dinner.