December 15, 2008
Besides Christmas, this is an extremely month in general at our house. All three kids have birthdays between Thanksgiving and Christmas. I know, I know, just thinking about that is exhausting, isn't it?

We celebrated John's birthday a couple days after his actual birthday (he turned 18 this year). He wanted Corned Beef for his meal, and I think that between Dave and John, they ate about 2 lbs each! Because they were STUFFED with MEAT (and I was just feeling a little nauseous after watching them eat, we waited on the cake until later that night. It was a Friday night, making both Dave and I SOOOO tired (and so was John) after a long week getting up at 5 am and going to bed at 11 pm. Unfortunately, we were not presenting the best party atmosphere for such a monumental occasion. Anyway, here's a picture in the dark with John and his birthday pie (I made a cheesecake). For some reason (that goes back to when the were wee) it's a tradition in our house to have the lights out when the candles are blown. He's purposefully looking pensive. He's wishing. (probably wishing he were celebrating elsewhere with all the glitz we put on! HA) Anyway, the cake was yummy. Men and boys are so hard to make gifts for, so I just went the easy route and got him a gift card from Gamestop. Game On. 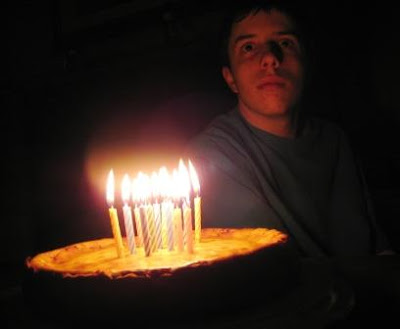 Last week, I mailed Candace's package so that she'd get it on time (her birthday is tomorrow). Here's a picture of the Card I sent her, followed by a picture of the package. I gave her some handspun yarn, fancy square wooden knitting needs (I purchased both those items from Twin Ponds Fiber Farm), a candy bar, clear blue three pronged handheld messager, a necklace I made, a glass ornament I received in a Splitcoaststamper swap, and a bookmark and photo clip that I made. She got them on Friday. I think this is the first time I have been EARLY for her birthday. 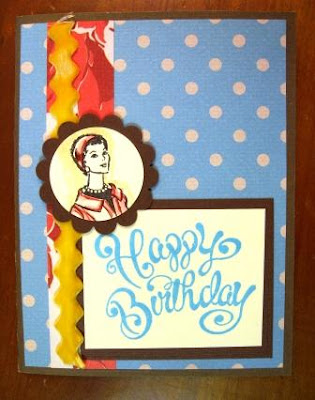 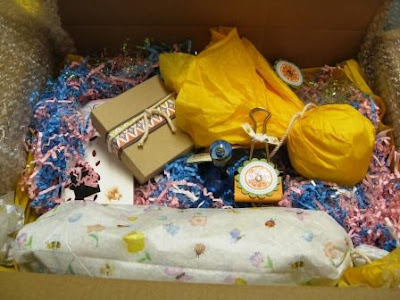 With that done, I had to buckle down and get to work on Caitlin's present.

The above slideshow is the 2009 Calendar that I made for Caitlin's Birthday and Christmas. Her birthday is first (November 28) and she wasn't able to visit over Thanksgiving and she's not going to be able to come up during the Christmas break because she has to work on Christmas Eve and also the day after Christmas. So, yesterday we went down to see her in Baltimore and had lunch. It was a really nice day. We walked around Hamden after we ate and did a little light shopping.

And, she liked her calendar. Being an artist herself, I think she realizes the amount of time it takes to put together something like this. Really the most time consuming part is figuring out the design (and for me, then locating my supplies, which are usually in three or four different rooms of the house!)

Anyway, I was happy with it and I'm glad she liked it.