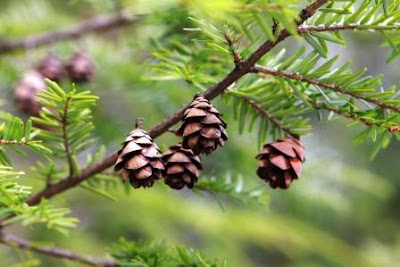 Isn't that picture a beautiful, peaceful image? I took this when I was home over the Thanksgiving Holiday. We went for a walk along the NorthRidge Trail. This was a trail I frequented when I was young. It is a trail that spans the ridges between Oak Ridge, Tennessee, and Oliver Springs. We probably only walked about 2 miles on the trail and jumped off about 1 mile from my mother's house, walking back along the road. It was a pleasant, warm afternoon, and these cute tiny little pinecones were enjoying the weather.

Anyway, it's posted here to help calm my spirit. This month is just screaming by. I have many gifts that need to go into the mail - but - I first have to finish them! So, darn, I'm more "behinder" than I thought.

My employer is starting to really feel the impact of the economic times. For the first time since I joined this particular group, we've been told that only fully billable folks will be working starting on December 22. This policy was announced to the entire company (of 95,000 employees!) My primary client told us earlier last month that we'd be transitioning off the project at the end of the year. We are finishing our work early, so we'll actually be done by the end of this week. And my other project was a short term effort that I finished the week after I returned from Thanksgiving (that has a lot to do with why I was so quiet over the last couple weeks). My other project, is an overhead project, so we're pausing for the mandatory shutdown period and will resume in January.

All that said, that means I will be taking two weeks off of work starting on the 19th. While I love being off, I wished it were when it was warmer! However, it will definitely give me time to finish up my last minute gift preparations before the Christmas Holiday. 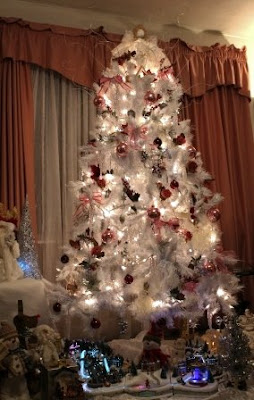 Shimmery, beautiful magnificance!!! This is my Aunt Sheila's tree. We visited with them over Thanksgiving too. It was on our way home, so we drove up the day before we were heading home and visited with Sheila and Tommy, John and Jean, and Sonny and Charlcie. Tina also came down to visit. Tina, Charlcie, Tommy, and John are my mother's siblings. Charlcie lives in my Papa's house. She isn't doing very well healthwise, which is a shame. She has congestive heart failure and is also diabetic. Her feet were very swollen and looked extremely uncomfortable. Amazingly, she's pulled through a couple critical issues recently. I hope she feels better over the Christmas holiday.

My Aunt Tina is a sight. She is very proud of her children and grand-children. She always has several pictures of everyone. When I saw her this time, she didn't have her brag book of pictures with her, but she usually does. She only had a couple (a couple meaning....10 at least) pictures of her grandchildren -- which range in age from 2 to 16. And oh my gosh, what a talker. She's like the energizer bunny in that regard.

My Uncle Tommy impressed my husband with his guitar and bango playing (he's very talented). While at his house, we all (Dave, John, and I) experienced our first private gospel concert! A couple young ladies that are friends of Tommy and Sheila came over after church that night and sang and sang while Tommy played the guitar. While I'm not a gospel fan, it was both interesting and entertaining. Poor John (he's 18) was patient, but I could tell he was pretty bored. Dave looked in wonder most of the time - I'm sure what he was thinking, but I'm sure he was experiencing a bit of culture shock. Being a Delawarean, he's not ever heard much southern (rather very COUNTRY) dialect nor hospitality.

I also saw my cousin Doug play in a band in Knoxville while I was visiting. HE IS SIMPLY AMAZING. His band has a wonderful guitarist, but Doug - he is an awesome harmonica player. Really. The music is blues and rock. If you ever get the opportunity to hear the Doug Harris Band, GO. They are really excellent. 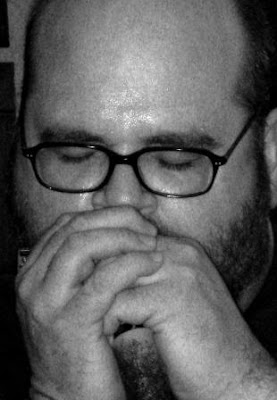 Let's see, what else. Oh, my brother John is now raising chickens for both eggs and as meat. He has 14 laying hens right now that are producing about 8 eggs a day. He said the number will go up to about 14 eggs a day when they all start laying. Here's a picture of "cluck", one of the laying hens: 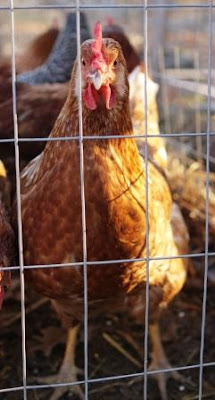 And here's a picture of one of the Roosters (of which, I'm not sure there function, since they are not being used to reproduce MORE laying hens): 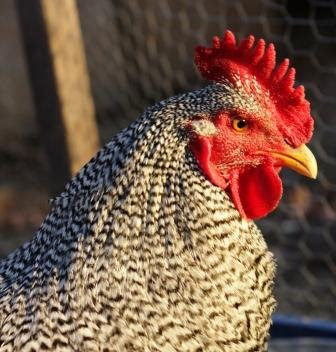 Here's a picture of my brother, Sam. He went with Dave and I to see Doug play. He's just silly. 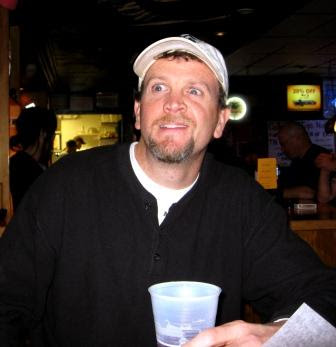 Sam's daughter, Jessica, is really quite a talented budding artist. She showed us her sketchbook (she's been sketching since she was 5). She has the same sketch book and each page is signed and dated. I found it not only amazing that she had the chronology intact, but her work is really good. She's only 10 and she is starting to use shading. And there are so many details in her drawings. Very Very cool.

Well, hmmph. I just didn't realize all the artistic talent in my family until this visit. Now I know where my interest came from.

On a final note...I noticed one thing in all the houses I visited over the holiday. There was a picture of Jesus in almost every room. I didn't realize that Southern Baptists had religious icons. I'm familiar with Catholic and orthodox icons, but now I think I have a handle on Baptist icons. Jesus at the Last Supper.

Robin said…
It looks like you had a great visit home for Thanksgiving. It also sounds like you do have many talented relatives. Hope you enjoy your time off. We'll have to get together.
Sat Dec 13, 07:56:00 AM EST