February 19, 2009
Last night ended eventfully. Right before I was shutting down (a little after midnight), I heard my cat growling at the back sliding glass door.

We have a fox in our neighborhood and I thought she was growling at him as he made his way through our back yard. When I turned the light on and looked outside, I was greeted by a young-ish rather LARGE German Shepard. He seemed like a teenager dog to me anyway. Very bright eyes, trusting, and friendly. 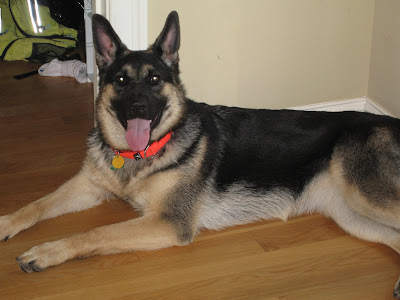 And...He really wanted in my house. I thought he was my neighbor's dog (they have two Germans) and thought he was a little lost thinking my house was his house....So, silly me, I let him in. The cats scattered...quickly I should add, because I don't think they have ever seen a dog bigger than them (Remember - Clyde is 4.5 lbs - smaller than any of my three cats!). Clyde of course became quickly concerned, because, well...he's an appetizer to a dog that size.

This dog was really curious. So, he's following Clyde and running around the first floor...and I'm trying to figure what to do with him. I didn't want to just let him back outside, because I was afraid, if he was lost, he would start to get more anxious, not pay attention to what he's doing, and end up getting hit by a card (if he made his way out of my neighborhood.) I got Clyde's leash and put it on him. I'm really glad dogs that large are usually very friendly. It always amazes me how strong they are. He took ME where he wanted to go! I was finally able to calm him down a bit and then checked his collar.

Yay, he had tags with a phone number. I called and the owner was thankful I had found him. He said he'd be right over and pick him up. We (the dog and I) went outside to wait. Amazingly, BEFORE the car turned onto my street, I could tell the dog KNEW his owner was coming, because he became very alert. And just after his ears perked and he quieted, a turned onto the street.

The owner was very nice. Said that he ran off when he saw some deer running through the neighborhood. And he was not able to catch him. We laughed about the whole thing and I went inside to clean up the mud that was trampled in the house

And made my way to bed.