I'm Such a Clever Boy Yesterday was not only the first day of summer, but it was also my anniversary.

The following is a mixture of Dave's inner voice around the flowers he gave me on Saturday and how one sentence (from John, the youngest) can change everything.

I think I'll surprise Bek with flowers. She won't be expecting these and she'll remember what a charming guy I am. Points for me.

I would really like to get her those roses. Wow, would she be surprised. With those, I might even get lucky! Let me ask the guy how much.

Ouch. That price, no way. Not right now, anyway. I just got my Visa bill.

Okay, let me see what sort of price he will give me for a bright bundle of mixed flowers and a couple roses.

That will work. And those roses he suggested...good choice. Better than the the "average" rose. They grow twice the size of standard roses...While I'm only getting two roses, I'm actually really giving four...yeah, yeah...That will work.

He will have them ready when? Oh. Okay. Tomorrow. Now all I have to do is remember to pick them up.

Flowers. It's been a while. She's gonna love this!

Saturday swings around and he and John are coming home from the mall after shopping for Father's day gifts (Dave was buying his dad something..John was buying Dave something)...

Stops. Picks up flowers. Comes back out to the car. Whistling.

John: "Ah, good call, Dad. Are you getting these for your anniversary?"

Oh No, I forgot our anniversary! Our anniversary is tomorrow? Ugh. These won't work for an anniversary! I cannot believe my luck. On an anniversary, these won't do! These aren't roses. She'll know. Instead of smiling and remembering what a great guy I am, she'll think I'm cheap. I just went from being awesome to being regular just...like...that.

I just went from getting points to losing points.

I just went from getting lucky to getting the look. The smile that says, "Thanks hun. That's nice. That's real nice." The look that lets me know she thinks I'm oh, so Raymond or King of Queens. Great.

Tells the entire story to John (except, of course, the part about possibly getting lucky).

John gets a big laugh out of it, because, well, this is his dad who IS the King of Queens living in an episode of Seinfeld.

Then he comes home, gives me the flowers. Tells me the whole story. 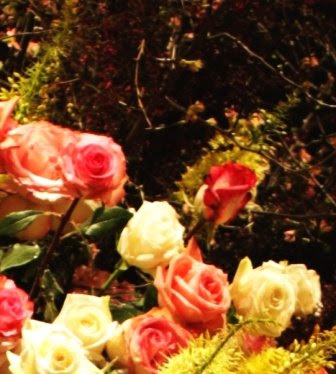 Had he not told me this story, I would not even have known he had forgotten our anniversary on Sunday. Flowers are flowers...I like them all!

FYI: The photos in the post were taken by moi at the Flower Market in March.