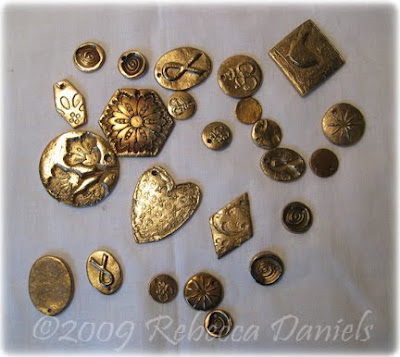 I recently had a few days to create some jewelry pieces in bronze.

I had a bit of a dilemma with one batch that was very frustrating. The bronz never sintered and when I took the pieces out of the kiln, they just crumbled. This was particularly disturbing, because these pieces were from a class. This is what they looked like when I pulled them out. My heart sunk. 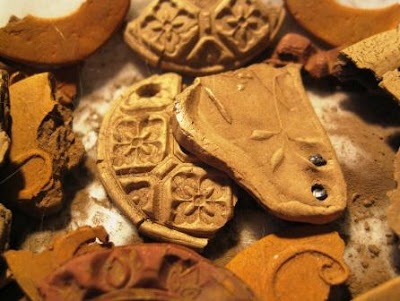 Just frustrated and devastated, I did some research on the problem and think...THINK...I know how to solve a similar dilemma in the future....I really don't want to repeat the failure.

Another exciting adventure that has been occurring SINCE I used the kiln...the fire detectors keep going off. At unexpected (and unwelcome) times. One day this week, I came home and they were just ringing up a storm... I felt so badly for the cats and my dog, because I could tell from their behavior that they had been putting up with the searing bell for some time...and of course, no fire. Hmmmm. We cannot figure out the issue.

Guess I should keep the kiln firing to the studio...eh?

Pam said…
Those are beautiful pieces! Too bad about your disaster, hope the kiln isn't malfunctioning cuz that sounds expensive! (LOve the new blog look!)
Sun Nov 15, 10:13:00 AM EST