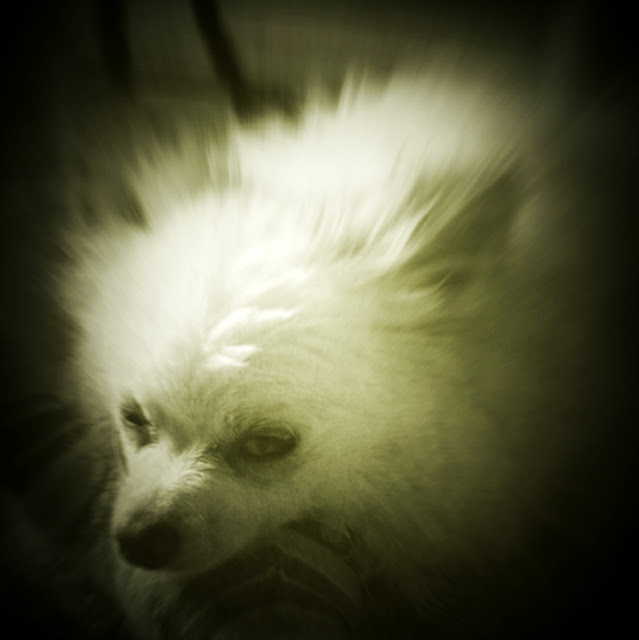 Oliver took a head dive into the patio tonight. After jogging with us in the woods, having a blast chasing deer, then running and fetching his favorite ball all night, he ended the evening without a smile on his face. Poor thing.

Visiting the yard before bed, coming around the corner of house from the driveway, running full speed with the biggest happiest grin on his face, it all ended when he jumped full speed toward the patio....and missed.

Instead of landing ON the patio, his face and nose were the first to hit the side of the pavers. I have honestly never hurt a pop so loud. It was dark and quiet outside, but that pop rang in MY ears.

It was liking watching the Road Runner, when the Coyote smacked the cast iron griddle that the Road Runner had instantly placed in front of him during a chase....Remember those scenes, stars and crunched up nose? Well, that's what Oliver looked like when he realized he hurt himself. All crunched up in pain. He even growled a little before he let me pick him up.

Upon inspection, his chin was swelling and he had a pretty good scrape...But I didn't see any blood in his mouth and his teeth were all intact....Still worried (I'm a worry wart about him...he's so tiny)...I was up all night watching him, making sure he aroused regularly. He woke up feeling okay, but I took him to the vet anyway. He didn't want anyone touching that area (would you?) and I was afraid he may have cracked or broken his jaw.

Turns out, he's okay. [PHEW] The vet said, "For a tiny little fella, he's a lot tougher than you'd imagine. Lucky for his sake, he's got a hard head."

Stubbornness aside, I guess I should be happy, eh?

Catherine said…
I'm so glad that your Oliver, though bruised, is okay! When our lab was almost 1 year old, he jumped out of the back of a parked SUV and landed on his head. PTL he wasn't injured either (other than, I presume, a slight headache).
((furry hugs))
Fri Sep 02, 04:44:00 PM EDT