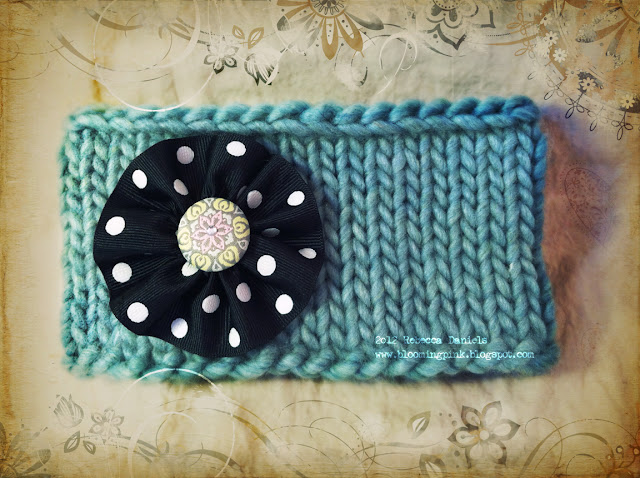 This morning, I have been playing around with Photoshop on a photo of a knitted headband I made. I'm trying to learn a little more about using and making PNG files, texturing, etc.  I'd like to make a digital scrapbook and have it printed, but most of the stuff I've made so far has seemed flat and unexciting.

I made this headband for a friend for her birthday....and the centerpiece is changeable (it is attached with a button!)  I'm going to make another embellishment that is more earthy.  She's an earthy gal and this will keep her ears warm whilst toiling in her food garden this early spring.

Lately I've been addicted to knitting (last two weeks I made a bunch of cowls) while watching the entire 4 seasons of Felicity on Netflix. I guess I was reliving college, but not reliving the drama of that age.  Have you seen them?  Felicity had quite the love drama going on.

I have to say, tho, that over the course of those seasons I DID develop quite the crush on Noel and Ben too.  But I seriously doubt there are ANY fellas out there like that. I haven't seen one yet at those ages willing to sit and "TALK" about any problems...or even address them, and certainly not raise the discussion.  My hubby is an awesome, loving man, but well, never mind...let's just say that these guys were like beautiful man-versions of an emotionally balanced woman!  Oh, and I don't think I know any emotionally balanced women either (not at ages 18-26 at least!)

I have a style question (serious), what sort of embellishment would be stylish on a knitted headband? I'm curious, because I don't think I have a good sense of style for things like this (and I don't wear headbands because of my shrunken head and lack of thick luscious hair.)

I'm thinking about making a bunch for gifts and charity fund raising....and possibly for next holiday.

Is this more suited for a child? What sort of embelly would an adult wear?  I'm going to experiment some more...on knitting stylish headbands AND Photoshop.

mtscrapgal said…
I think you nailed it your pix this time. I can almost feel the texture of the headband. Yu might experiment with flowers made of different fabrics for emblishments. Flowers seem to be very trendy for head gear these days.
Sun Mar 04, 05:06:00 PM EST