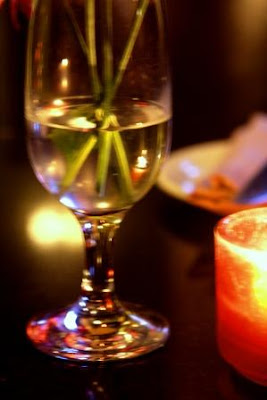 Well, I just have to take a moment to talk about how much fun I had spending the day with Dave in Philadelphia. We went to the Flower Show and stayed for HOURS. I took so many photos...I took two rolls of BW film and 15 Gigabytes of photos on my digital camera. I scanned through a few today...The picture above I took at dinner. It's really blurry because of the lighting conditions (and my unsteady hand).

After the Flower Market, we walked about 20 blocks to go to dinner on Market Street in the Old City section. We ate at a really cute little restaurant - Gigi's. It was very quaint. I liked the food, but didn't care too much for the music they were playing. It seemed a little too "clubish" for the romantic atmosphere.

Because it was first Friday, we enjoyed strolling through the art district, visiting all the galleries. Saw some "interesting" artwork. A couple of the galleries were modern art. We meandered into one studio that was Jewish artwork, and they were beginning a celebration of Ta'anit Esther (Fast of Esther). They read in Hebrew and ended with a toast of wine. Another gallery had artwork that was died/sewn fabric landscapes - most looked like marshland. They were amazingly intricate. The stitching reminded me of a topography map. And the material used looked like thick interfacing material. Another gallery was more traditional oil paintings, and another was a photo gallery with an exhibit of photographs (large photographs) of irons. The iron photos were really amazing. They looked like those poster photographs you'd see of fancy automobiles. It was very interesting to see all the different models of irons that have existed since the early 1900's. And the beautiful colors of some of them.

One of the last modern galleries featured about four artists. One was a ceramic artist with sculptures of strange things (for example, one was a centerpiece featuring a feast of pigs heads, pickles, and vegetables). The same artist had a wreath of ceramic raw whole chicken fryers. Yes, odd. This same gallery also had lounge chairs made from steele and painted with automotive paint. They were very shiny, slick, and modern. There was a jewelry artist showcasing some unusual, large pieces. They were beautiful, but not at all traditional. I also don't think I could really wear any of the pieces - simply because of their size. My neck is too skinny to do justice to large pieces like that. In this same gallery upstairs was some cast glass pieces that were really beautiful and very large oil paintings...mostly modern steele architural ruins. The paintings featured alot of sky blue and rusted steele colors. The lines and paint were very interesting to look at.

We had alot of fun staring at some of the art - there were times where Dave and I were just cracking up....literally laughing out loud. Not at the art. At each other - Mostly because of all the little jokes and antics my husband was pulling...Like - Deciding to make really large wooden ear pieces and painting "BlueTooth" on them. Wear them and walk around talking to himself. This would be in protest to all the nonsense we saw around us. What's with people that they can't be anywhere without a cell phone in their ear? I don't get it.

Then we walked 20 blocks back to our car and jetted home. We arrived home relatively early, considering all that we did. We were home by around 10:30 pm.

It was great day. I wished I had more days like that.