Memory in a Photo

March 31, 2009
The following is another TTV shot in a series I took last year on what had to be absolutely the hottest day of the summer. July 19. I Remember it clearly. The shot doesn’t reveal anything regarding the suffering heat. It is so much more pleasant looking. 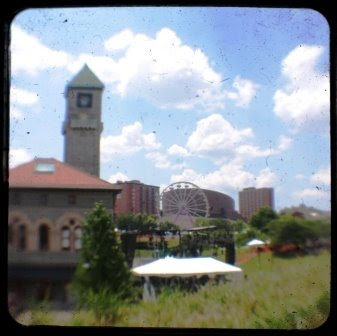 My dog, Clyde, and I went to an art festival in Baltimore and spent the entire day, walking around, looking, and purchasing some really cool stuff. That part was really nice. And the best part was later, we listened to some Druid Hill street performers – to me they were The Druid Hill Street Performers!

By the end of the day, my poor guy was so exhausted and actually looked wilted. It’s a good thing I had thought ahead and brought along a water bowl and a couple water bottles, because he certainly needed it throughout the day. He slept soundly all the way home and into that evening. Zora and Jack (mother/father in law) went down the next day and it was just as hot. She actually told me when I spoke with her later that week that at one point, she actually thought she might die.
All that memory in this one photo overlooking the festival from the hill.

March 07, 2014
Today I'm participating in a really fun hop!  We're celebrating my friend, Julie's, 2nd anniversary blogging.  We all met through our mutual love for crafting.  It's been such a great two years admiring each other's work, sharing ideas, and supporting each other in our artsy endeavors. If you want to see the entire hop, start at Julie's blog HERE This is the project I created for the hop! There are LOTS of prizes that have been donated by some wonderful companies!  (see Julie's blog for all the details). Just leave a comment on each blog for a chance to win one of MANY prizes.  I'm ready for a great weekend.   I'm counting down the days until Spring. AND taking Monday and Tuesday OFF just because! Leave me a comment telling me what you appreciate most about your friends.  Me, I love that I can reach out and get support when I need it.  Just recently, it really came in handy! Now, Click on the button below to go
51 comments
Read more