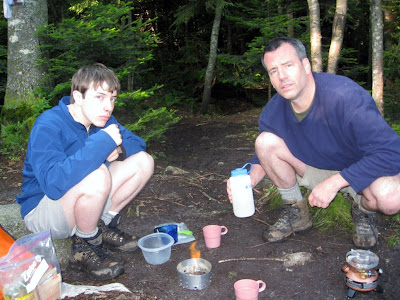 It rained ever so slightly overnight while we were in the tent, but it stopped by the time we were up and about.

Above is the picture of John and Dave trying to get some water to boil using the solid fuel.

We decided after this breakfast that we didn't really like solid fuel too much! It takes forever to get water to boil and ours kept going out.

The counselor of the kids took pity on us and loaned us his propane cooker. We have a really light one, but Dave had decided that this trip he wanted to try out the solid fuel.

Next time he makes changes like that, I'm taking backup! LOL. Because I don't like anything keeping me from my morning cuppa java! 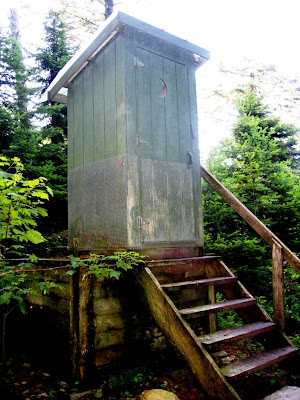 On this hiking trip, we were "lucky" to have privy accommodations at all our tenting sites. On an AT Trip through TN a few years ago, there were "privy areas"....Needless to say, I wasn't too happy for most of the trip. And we were also lucky that these were pretty "clean". I don't think I saw a single spider in one of them the entire week! 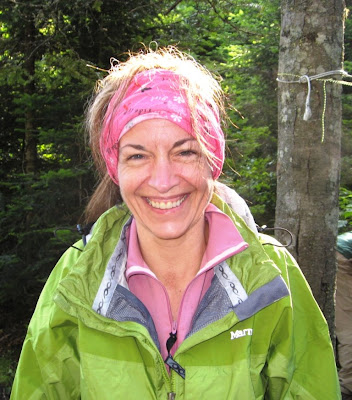 Me all happy and ready to get started. You'll notice that my attire doesn't change much! I wore the same thing all week...my boss nearly grossed out when I told her that I didn't change socks until the 4th day! (I know...too much information, but clothes are a luxury of weight that I couldn't afford this year!)

We were all stinky by the end of the first day...making our "zone of freshness" more expansive as the week wore on...! 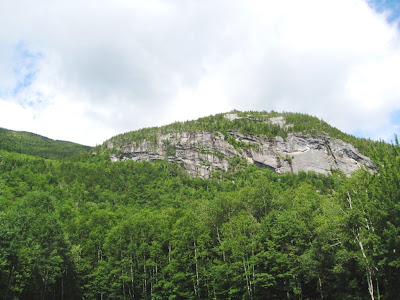 The hike on the second day was another really big mountain traverse. First, we had to hike down to the first road crossing (Route 26 in Maine), then go back up to the top of Old Speck Mountain, cross it, and settle about 1/2 way down the other side at Speck Pond.

The above is at the bottom after I crossed the road. That's a pictures of "Eyebrow". There is a trail called the Eyebrow Trail that a couple hikers told me lived up to its name. You cross right across the rock face using a series of ladders and cables...YIKES. I must admit that I'm glad the AT didn't include this trail! I'd rather do it with 30 less pounds on my back. 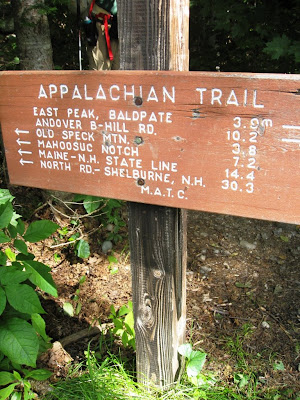 This trail marker was just across the parking lot at the trail heading up the mountain. I had almost 4 more miles. I didn't take a picture of the trail, but it yielded no relief...It was probably steeper than the day before! And a bit rockier. 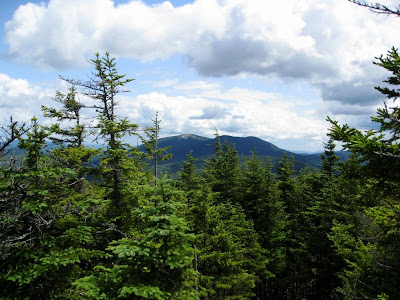 I worked up a pretty good sweat going up that mountain. This was what I called a "false peak", because I could have sworn I was at the top, but NO! This picture you can see way off in the distance where I we were hiking across the bald the day before! The white cap in the photo is Bald Pate...Cool, huh? [It's in a bunch of my pictures on this day]

On the way up, I ran across a couple of sisters that were vacationing in Maine from Massachusettes. They were the ones that broke it to me that I wasn't at the top yet...They showed me the map and said I would know it when I saw a trail marker leading to the fire tower. 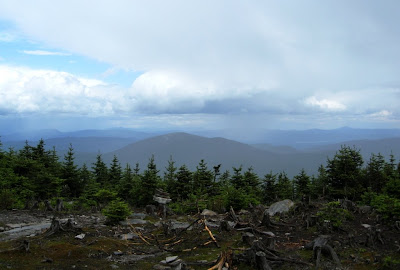 I was the first in my group that day, so I took the side trail that led all the way up to the peak of the mountain, where I found the fire tower.
In the picture above, you can see on the right some rain. Also look to the left, right on the edge of the photo - another patch of rain! I was hoping they were NOT heading in my direction.

I climbed up the fire tower where I could get a great view of everything! [I was also hoping to get an idea of where I was headed!]

The sisters ended up meeting me at the fire tower not too long after I got there. They joined me on the tower. 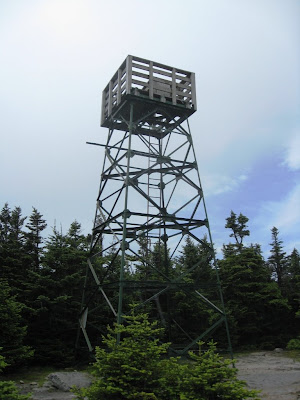 The next picture is from atop the tower (looking in the same direction).

What's awesome is that while we were on the top of the tower, the wind died down and the sun came out! We were averting the rain - at least for the time being. 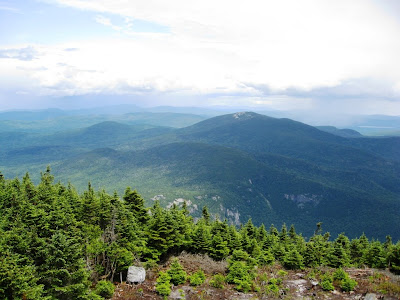 Oh, My! This is the path? [That's what I kept thinking when I saw stuff like this.]
That white patch is a really scarey, vertical rock face that I had to hike down (alone). I was a bit creeped out after I finally got down that face. [And thankful] 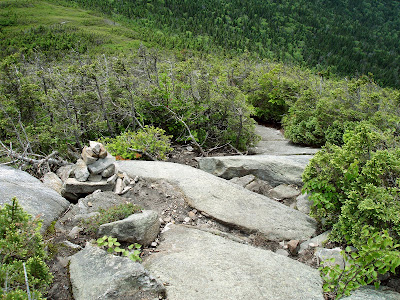 Not quite at camp yet, but this is a snapshot looking back after I hiked down from the top of Old Speck. It was pretty to look at from afar, but I didn't take any pictures while I was hiking down...mostly because I was nervous the entire time! 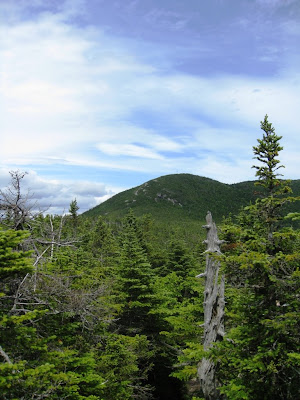 Closeup of the creepy path! 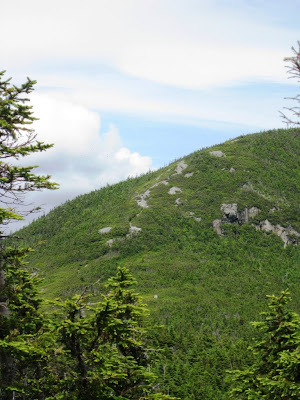 By the time I reached Speck Pond campsite, my knees and feet were really tired of hiking downhille, across bolders and down huge [really HUGE] rock steps! I was so happy to see camp!

The following is a picture of the pond. It amazed me that such a large pond existed so high up in the mountains. It was so peaceful and beautiful. I was exhaunsted and wanted to soak my aching toes in the cool pond. 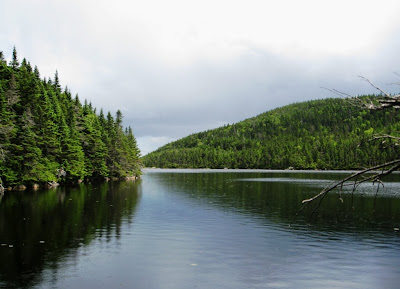 Earl had passed me while I was up on the fire tower, so he was already at the site when I arrived. Noone from my group had chosen to take the 0.6 [round trip] side trail up to the tower.

This site included a Caretaker and a minimal fee. The fee was to take care of the trail maintenance (one mile in each direction of the site) and the composting from the privies [can you say...UCK]. He was a really nice fella. He hiked the AT last year and this year was employeed with AMC. He spent 10 days at camp, then had four off. He accessed the site via a 4 mile trail that hooked up to a logging road.

He was a mountain man. I'm guessing he was in his mid-20's. Very down to earth. Soft spoken and just all around pleasant. He was talking with everyone...and in one conversation, he mentioned that he had never owned a computer, and had only recently gotten a cell phone (his first). So there...life can exist without the WWW! Although he did admit that he didn't OWN a computer, but did them...at libraries, etc.

About 1 hour after I got there, John and Dave arrived. We claimed our tent platform and Dave immediately layed down! 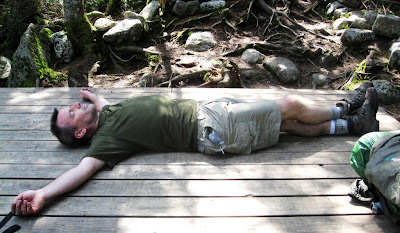 After dinner and a little rest, and lots of chatting with the other campers, we turned in! 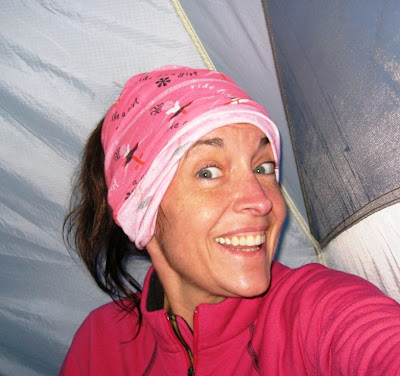 Pam said…
What a fun continuation of your journey! Chuckled over the "zone of freshness" -- hee hee! Glad you had the energy to climb the tower, the photos are gorgeous!
Sun Jul 26, 09:40:00 PM EDT