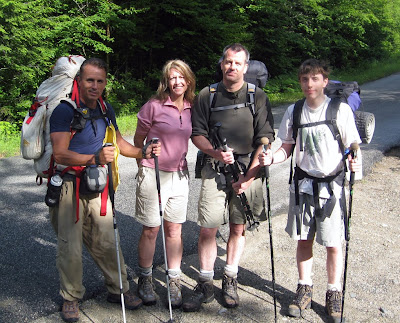 I am finally starting to post a few pictures from my hiking trip last week. I took about 250 pictures. While I took so many, there were some I wished I had taken...and then there are many that do not do justice to the vastness or the beauty.
This is a picture of our group taken at our drop-off point on the first day. We hired a guy whose trail name is The Golden Waldo to do our transport to our starting location.
We were shuttled with another group that was hiking a similar section of the trail...Bob, from that group, took our picture. From left to right: Earl (Dave's cousin), Me, Dave, and John. Eager, energetic, and full of energy, we start our adventure...which on day 1 included a 3000 foot climb across Bald Pate, and then down to settle for the evening at Bald Pate Shelter. 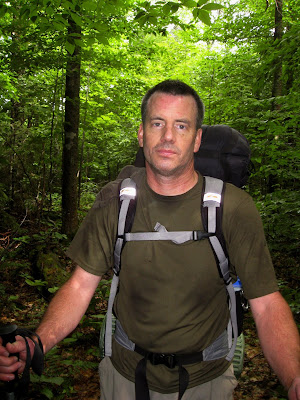 A few miles into the trail, I took a picture of Dave. Doesn't he look smashing? (And possibly a little annoyed?) Note that he is clean shaven (well, sort of)...this will change over the coming days. 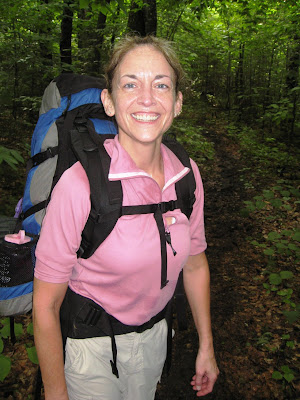 And of course, it's only fair to get a picture of me all sweaty! 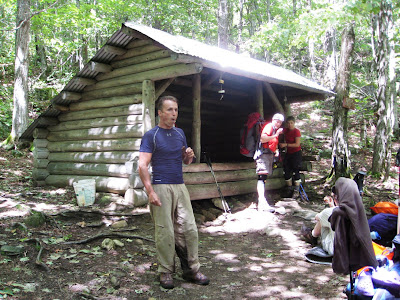 We stopped for lunch at the Frye Notch Lean to, which was about half way to our final destination for the day...It was about 2 miles from the first peak. That's Earl eating, and in the distance, a couple of the gals from the Trail Club that were on the same shuttle that we were...Kathy and Janet. I wonder what Kathy is saying to Janet...she has an interesting look, doesn't she? 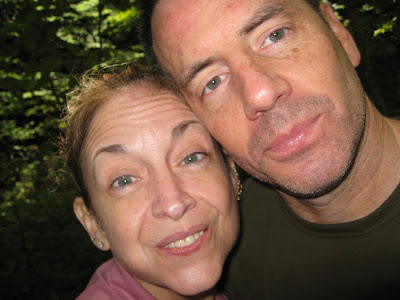 Me just being silly...and Dave indulging. 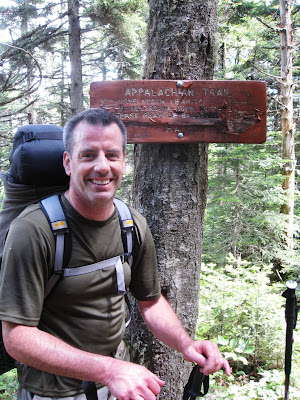 Dave standing in front of a trail marker. We were getting closer to the top...and it was getting noticeably steeper.

The hike was a climb up...at about a 60 degree angle...and believe me, it felt like it. In Maine, they don't have switch backs like I was used to...Nope...it's straight up. The trail became progressively steeper as well as rockier...and included traversing boulders. Using hands to "climb" was crucial. And thank goodness for trees, because without them, some of the hefts upwards wouldn't have been possible. 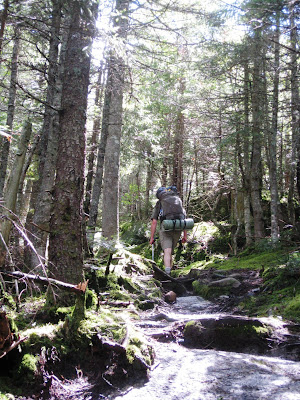 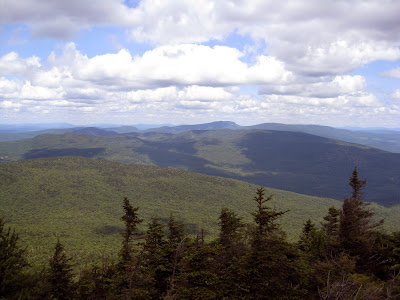 A beautiful vista not far from the peak. 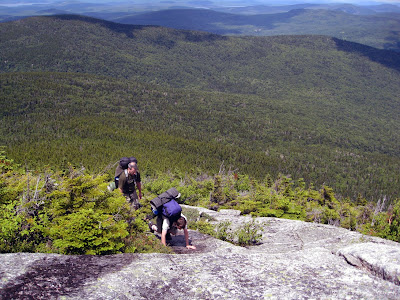 It's hard to capture just exactly how steep it was at the peak...needless to say, I didn't take another picture until I had sound footing. You can see Dave and John in the distance coming up. They were NOT going to come up the face of the rock until we (Earl and I) were sure we were still on the AT and found a blazed marker. 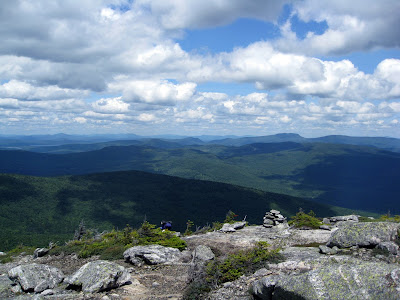 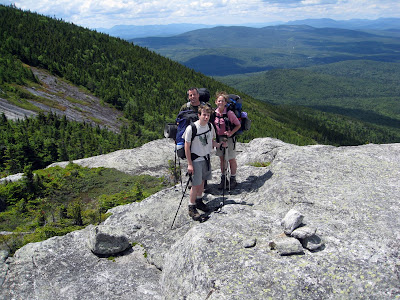 Earl took this picture of the three of us on the side of the bald that we were about to go down - straight down! See right behind us...the drop off? Yep, it was not only steep, but also exposed...very creepy. If I wasn't a rock climber, I would have been REALLY afraid. Actually I WAS afraid...just not REALLY afraid. 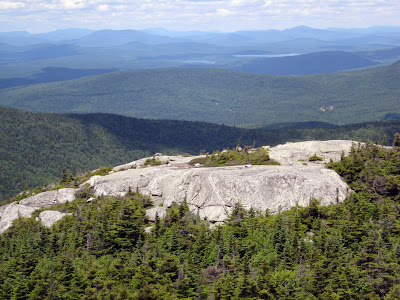 This is a close-up of the bald after we had crossed it. This was the biggest bald we were on that week. There were others that were higher, but not as large. It was such a beautiful day. You could see for MILES in every direction. 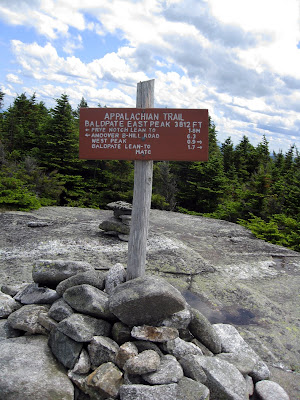 This marker shows that we had come 6.3 miles and had almost 2 more to go until we reached the lean to / shelter location where we planned to camp for the evening. 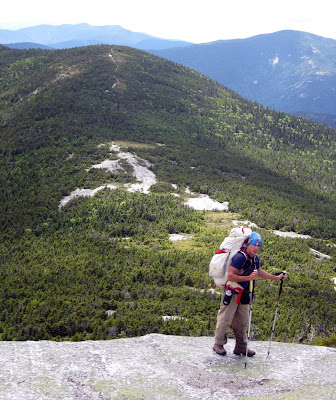 I took this picture of Earl to show not only how high we were, but also it shows where we are headed. You can see the trail just behind Earl as it goes back up to the next peak (but we had to go DOWN first). 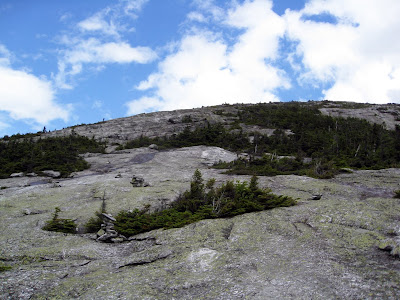 The picture above is looking back after we came down from the peak. Yikes. It was bit nerve wracking! 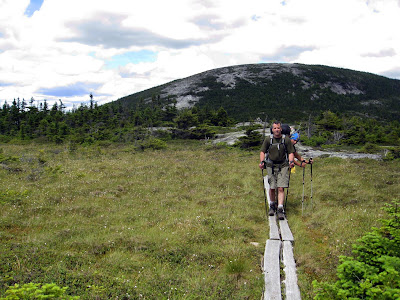 Behind Dave and Earl is a glimpse of where we had come from. The planks we were walking on kept us from sinking into muck. In places, it was quite deep (in at least two places, I pushed my poles down almost to where my hands were holding them at the top!) 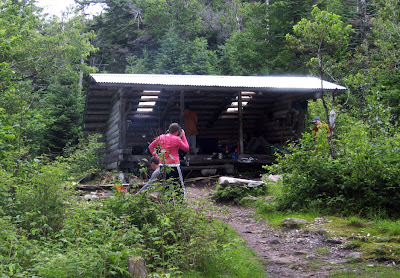 Bald Pate Lean To. Home for the night. When we arrived, there was a group of high school kids (roughly 14-17 years old) from a 4H camp. They had been hiking for several days and were headed out the next morning. They were training to become Junior Maine Trail Guides. They were enthusiastic and fun. 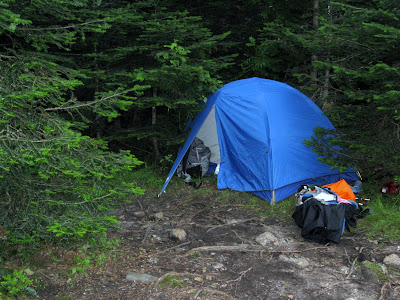 Home sweet home to Dave and I for the evening!

And were we ever bushed! We ate, talked to the kids while they made a fire, and before the sun went down (around 8 pm), we were climbing into our sleeping bags! By then, John was already fast asleep in his tent!

Karen said…
Don't you just get a rush when you conquer each of those 'hills'?!! I was able to experience it in Colorado last summer....and the views!! Not much to conquer here in MN! HA! TFS your pics and story...watching for the next chapter!!
Thu Jul 23, 04:20:00 AM EDT

Pam said…
What an amazing post - great narration and beautiful shots ! I feel like I was hiking right along with you! Can't wait for the next post!
Thu Jul 23, 09:16:00 AM EDT

CarlaKH said…
considering that I get out of breath walking up one flight of stairs...this just seems so impossible! Love these shots and what a great accomplishment too!
Sat Jul 25, 04:57:00 PM EDT

Anne said…
Looking at your pics, I could feel myself swallowing the fear in my throat. Aaaaaaaaahhhhhh. . . . Fear of heights, big time. That was my scream as I fall off the peak. Glad you had a good vacation, girl! It's Belize or Punta Cana for me, any day.
Sat Jul 25, 08:34:00 PM EDT